This past Saturday was an eventful one at the largest mall in America. Not only was it supposedly the biggest shopping day of the year, which translates into a chaotic version of the “maddening crowd” but it was also the site of choice of protesters who were anxious to transform the massive space into a portal to stage a “die-in”. 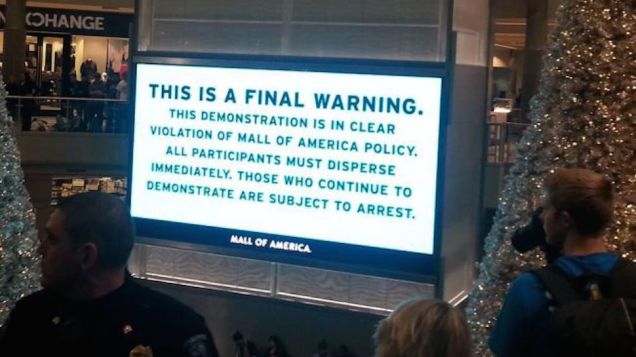 Nothing wrong with that since as citizens we harbor democratic disposition, which allows us to express ourselves passionately whenever there is an inspiration for it.

But according to law enforcement, the protesters were breaking the law by hijacking a private space and inadvertently proving to be a nuisance and disruption to the general environment.

As moving as the images have been, seems like the organizers of the protest will most likely face criminal charges for ignoring the rules of engagement and the warning sign that was also vocalized for emphasis. 25 people were arrested for trespassing but Mall of America wants the plotters to be brought to justice for violating their code of conduct, and based on their statement – they are convinced there was a cunning agenda behind the demonstration, “It’s clear from their actions that these political activists were more concerned about making a political statement and creating a media event than they were about the safety of others, who came to Mall of America for an afternoon of shopping and family entertainment”.

A criminal case is currently pending courtesy of Sandra Johnson, an Attorney from Bloomington City who is working overtime to ensure that the mall reclaims the financial loss they suffered during all the “ruckus”.

At the end of the day it really is all about money and how to secure the stability of institutions that are principled by the need to extract as much of it as they can from people who really don’t have it to begin with.

But most importantly it is a message that is filled with extreme shallowness and negligence for the overall temperament, which hinders on justified rage at the blatant injustice leveled at innocent victims.

Filing criminal charges may be a temporary way to diffuse what turned out to be a controlled situation but the existing damages are far more dire and can’t be settled with dollars and cents.