Anyone who is an avid fan of Netflix’s hit drama – House of Cards has to be privy to the undeniably dynamic presence of actress Robin Wright who embodies the delicious complexities of Claire Underwood with astute brilliance – against the stronghold of co-star Kevin Spacey’s Frank Underwood. 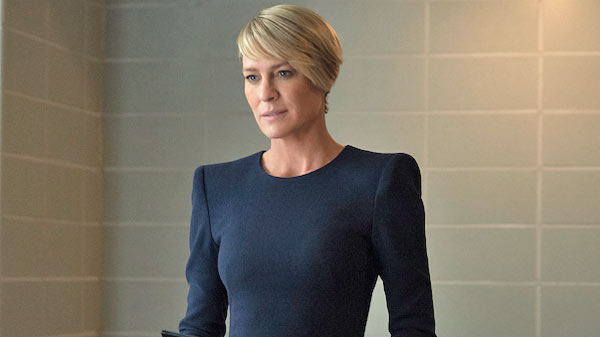 Both actors give their characters permission to frolic in the intricate landscape of one of the most captivating political dramas in recent memory.

The power of Claire Underwood has steadily increased as the seasons progress – and that fact didn’t escape Wright as she confirmed her discovery during an interview with Marie Claire magazine – “I was looking at the statistics and Claire Underwood’s character was more popular than [Frank’s] for a period of time”. “So, I capitalized on it. I was like, ‘You better pay me or I’m going to go public’. And they did”.

It doesn’t sound like the outspoken actress was doing too badly but considering the fact that she hit the jackpot by starring in a show that she aptly describes as being one of the few “where the male, the patriarch, and the matriarch are equal” – she was absolutely within her rights to demand the same pay as her male co-star.

And it looks like her ability to fight for what she’s worth – paid off! We’re guessing Claire Underwood would be quite proud.