Oscar-winning actress, Lupita Nyong’o who is also part of the elite cast of the upcoming ‘Star Wars: The Force Awakens’ which has already begun it’s winning streak by setting records in global ticket sales, has another victory on the horizon. 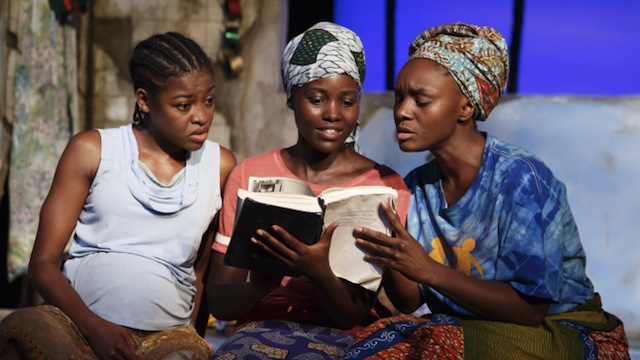 Eclipsed – a play written by Danai Gurira who also stars in AMC’s hit series, The Walking Dead is headed for Broadway for the upcoming spring season.

After a remarkably well-received Oct. 14 debut at Off Broadway’s Public Theater, the heart wrenching play that centers on the emotionally gruesome consequences of the Liberian civil war and how it coerced the systematic responses from the women who were caught in the middle is transitioning to higher ground.

Eclipsed is the latest offering to help usher in an exciting period in theater that is brimming with much needed diversity. The latest slate of shows seem to be captivating a wide range of talent that proves that this trend could shape up to be more than just a passing phase.

Recently the critically lauded musical Hamilton gained nationwide attention for its racially diverse cast featured in roles embodied in America’s founding fathers. Other notables are On Your Feet!, from Gloria and Emilio Estefan and Allegiance that boasts a mostly Asian-American cast.

Eclipsed is scheduled to end its run at the Public Theater on Nov. 29. Previews at Broadway’s Golden Theater will commence on Feb. 23 with the official opening planned for March 6.