Sunday’s episode of Mad Men, ‘A Day’s Work’ was filled with the usual offerings that make this show hard to resist.

Office politics seemed to take center stage, as disgruntled workers faced unwelcomed challenges as well as the wrath of their superiors, while Joan dutifully assumed the usual role of referee.

Don is still stumbling in the dark and Pete who is stuck in the LA office, can’t rise above Team New York’s concern when it comes to his capabilities. Not much of a surprise there.

But there was a lot more action on the secretarial front, thanks to Dawn and Shirley’s misadventures. It’s important to note that both women are African-American, which already lends itself to some level of discomfort. Lets take a crack at Dawn first. The absence of her boss, Don Draper, has left her in a vulnerable position. She is not only trying to sustain her temporarily ousted boss, but also has to accommodate the needs of Lou, who is systematically demanding, and as we later discover, a real prick.

Sally Draper shows up at the office and stuns Lou with her presence. He is now forced with task of explaining why his name has replaced her father’s on the front door. He annoyingly passes her over to Joan and we know from his reaction that the die is cast. Dawn is going to get it when she returns! And get it she does! After summoning both Joan and Dawn to his office, he makes it clear that he needs his temp to be replaced ASAP. Joan is perplexed and Dawn is bursting with rage. I feel her pain! After years toiling away as an executive assistant and dealing with bosses who look right through while barking orders, I was nostalgically livid. Dawn breaks it down without skipping a beat. She was busy trying to pick up a Valentine’s Day Gift for Lou’s wife while his nemesis’ daughter was grilling him with questions. Perhaps if he were a better husband, she would have been at her station, ready to thwart any sudden occurrences. Lou was embarrassed but unwavering in his request for a new Gal Friday. Dawn was channeled to another desk but sometimes in life (not as often as we would like), the good gals end up on top. Joan’s reassignment ended up being Dawn’s unexpected blessing and she ended the day with a huge smile on her face and a much bigger office space.

Shirley also had a series of tests to pass. She spent the day battling the elements being ushered in by none other than Peggy. A bouquet of flowers always elicits a strong response from females, regardless of the social climate. But when Valentine’s Day is hovering, emotions become unbearably heightened. This storyline was particularly sticky. Peggy sees a gorgeously arranged vase of red roses on the desk of her black secretary, and automatically assumes they were sent to her from her doomed lover, Ted, who is miserably partnered in the California offshoot with pathetically inclined Pete. The truth is that those flowers were courageously sent to Shirley by her boyfriend. But Shirley is forced to endure the torture of having her vibrant stems stolen and replaced twice before she can readily admit the truth. Peggy’s reaction recalls my song and dance with equally entitled twenty-something Caucasian girls whose social calendars didn’t give them the allowance to factor in anything that deviated from their picturesque reality. She was basically livid and offloaded her pent up pain and suffering on an innocent bystander, gawking at the remains of her emotional train wreck. In this instance, the white girl got her wish, and Joan was charged with the task of finding Shirley a new home. 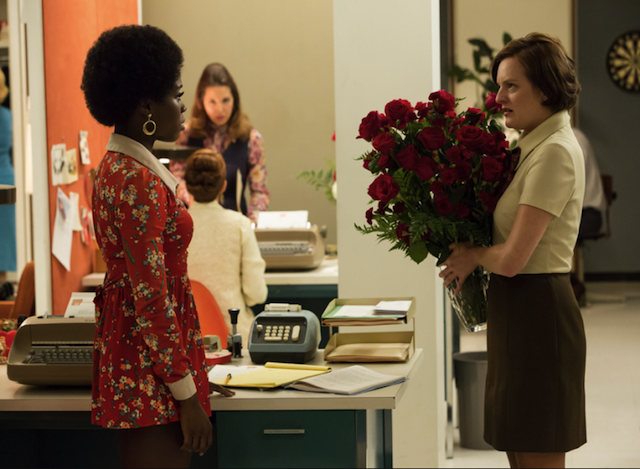 The racial undertones were quite evident this time around especially with the characters of Dawn and Shirley thrust in the spotlight.

The most telling arc was when the elderly Bert Cooper, reminds Joan that putting Dawn in reception may scare aware away potential business. Yikes! But as jarring as that was to watch, I couldn’t help but wonder if that same sentiment is still honored today.

The good news is that Don Draper was able to woo his stranded daughter enough to get her to utter the words “I love you” as he dropped her off as at school.

The look on his face said it all. Don Draper is poised for a comeback, thanks to the three little words uttered by the love of his life.