Songbird Alicia Keys is now proving why Givenchy so eagerly announced the Grammy winner as the new face of their fragrance division. 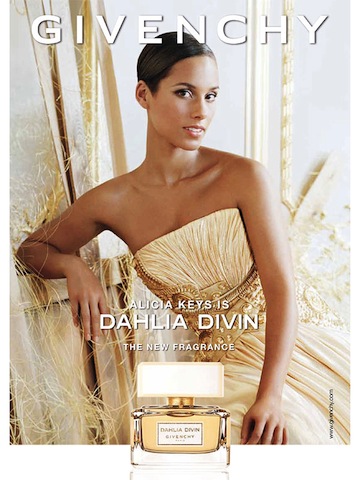 A month later, and Keys is featured in her first beauty campaign decked out in lavish confection whipped up by Riccardo Tisci, who made the decision to bring Keys onboard as the mascot for the new perfume, Dahlia Divin.

British photographer Tim Walker delivered the print ad in the confines of a Paris atelier, and he is responsible for the TV version, which will be accompanied by a soundtrack, complied by Keys.

The collaborative duo seem to be a match made in heaven, since this isn’t the first time they have made magic together. Tisci designed her wardrobe when the singer performed four shows to celebrate the 10th anniversary of her first album.

For those of us itching for another album, Key’s confirms that her next offering will be unleashed in early 2015. She also hints that this time around, she explores the complexities of human nature. Sounds promising!