December 18, 2015 Ezinne Ukoha
Nicki Minaj has a lot to celebrate as it has just been confirmed that the cast for her new show on ABC Family that is currently transitioning to Freeform have all been selected.
Among the those starring in the sitcom about the life and evolution of the Queens-bred rapper is none other than The View’s long-time moderator, comedian, Whoopi Goldberg. Goldberg will play the role of Miss Martha – the meddling neighbor. 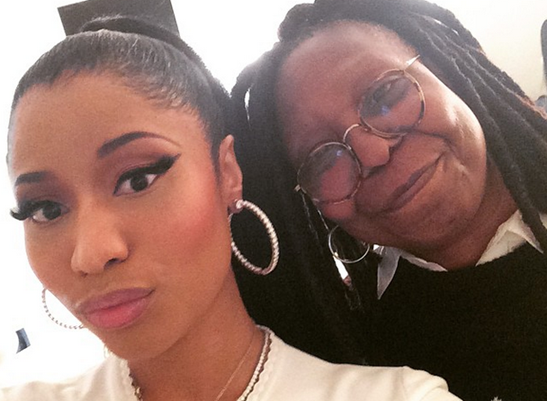 Model and actress Selita Ebanks who has been kicking it over at the Real Husbands of Hollywood will play Nicki’s mom, Grace while Ariana Neal (Get Hard, Fruitvale Station) will play Nicki when she was known as little Onika. The rest of the cast rounds up the core family members that include her dad, Vincent, and her brother Jaylen.
Earlier this fall it was reported that Minaj was working on a comedy about her family and their move from her birth town – Trinidad to Queens , NY in the early nineties. The focal point of the show will be her journey through her dreams of stardom to its manifestation.
Shooting starts this winter in Queens and Minaj is expected to also appear – although it’s unclear how often she will appear.
What is certain is that she has been assigned the duty of narrator in the same vein that Chris Rock provided for his own specialized vehicle – Everybody Loves Chris.
While speaking to Billboard, Minaj made it known that her project will not be regulated to the tired cliched of the typical black show.
As they say – action speaks louder than words.
tagged with ABC Family, Chris Rock, Nicki Minaj, Photo Courtesy of Twitter, Real Husbands of Hollywood, Selita Ebanks, The View, Whoopi Goldberg