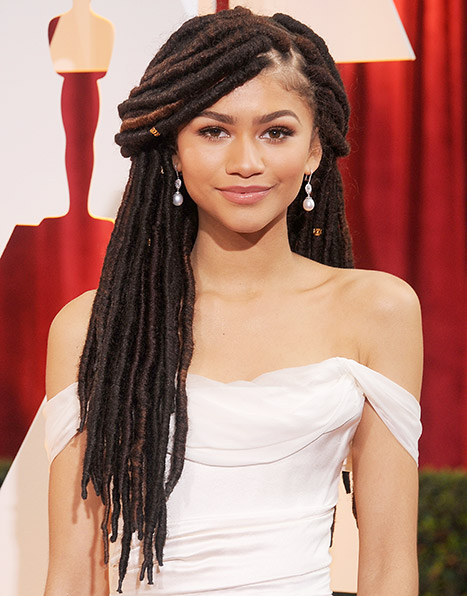 Apparently Rancic didn’t think the Oscars was the appropriate place to sport locks that not only overwhelmed her “tiny frame”, but they look like they stink of “patchouli oil or weed”.

Obviously once Zendaya caught wind of the segment that featured her negatively not to mention stereotypically – she had to fight back. She took to Twitter and posted a response that thoughtfully summarized why having a white woman knock down ethnic hairstyles using racial slurs and references is deplorable.

“There is a fine line between what is funny and disrespectful. Someone said something about my hair at the Oscars that left me n awe. Not because I was relishing in rave outfit reviews, but because I was hit with ignorant slurs and pure disrespect. To say that an 18 year old young woman with locs must smell of patchouli oil or “weed” is not only a stereotype but outrageously offensive. I don’t usually feel the need to respond to negative things but certain remarks cannot go unchecked…”

Rancic tried but failed to redeem herself by offering a pathetic apology that clearly was an attempt to avoid ownership:

‘Dear @Zendaya, I’m sorry I offended you and others, I was referring to a bohemian chic look. Had NOTHING to do with race and NEVER woud!!!”

Unfortunately the damage is already done and Giuliana Rancic has now joined the ranks of white women who blatantly offend and then coil into a corner once they’ve been called out.

During these times of racial strife – it is hard to conceive that anyone would make comments that could be remotely assigned as derogatory. Dreadlocks are generally deemed as the most unsanitary hairstyle in the universe – even though that assumption couldn’t be further from the truth.

Rancic’s comments are particularly damaging because of her position as a conveyor of pop culture and the fact that her words could have substantial impact on the on young impressionable women.

This isn’t the first time Rancic has insulted a woman of color based on her hairstyle. Solange Knowles was knocked down for rocking her Afro in but somehow that remained under the radar.

It is outrageously unacceptable to have a white woman publicly dismiss and insult hairstyles that are mostly worn by black women. It serves as a reminder that ignorance is a virus with no cure that can manifest in destructive ways.

Rancic and her crew should be penalized for their actions and if Twitter has anything to say about it (which so far looks promising) that just might happen.