Mayor Bill de Blasio is simply the best thing to happen to New York since Michael Bloomberg vacated his post at the beginning of 2014. But even before de Blasio got comfortable with his new role, there was enough evidence to suggest that the city had finally garnered a leader who spoke and understood the language of the streets. 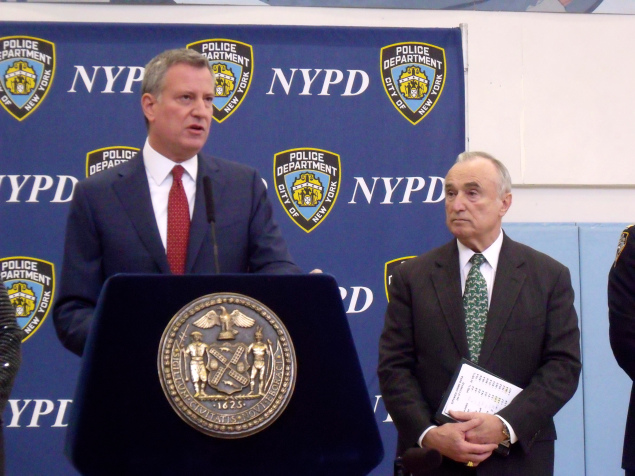 Unlike the last predecessors, the new mayor seemed to have an acute understanding of the daily challenges of “everyday people”, a characteristic sorely missing from Rudy Giuliani and Bloomberg, who spent their terms catering to the wealthy and privileged sect, a fraction of the population that fulfilled their personal quotas.

Having someone like de Blasio dutifully occupy Gracie Mansion with his multi-cultural family, gave most New Yorkers the gratifying assurance that things were going to be drastically different this time around.

Who ever was banking on that ideology can’t deny that New York is now being governed in a way that even has the NYPD totally dismantled. And what perfect timing – based on the current racial strife it is unbelievably ironic that the current mayor is unwilling to ignore the systematic brutality that men of color have been subjected to for way too long. His testimony during the press conference after the Eric Garner verdict incensed law enforcement and their supporters but it heightened the loyalty he had already garnered from most of his constituents.

It was an emotionally raw admission of what it really means to be the father of a teenager who happens to be black. Listening to de Blasio describe the fear he and his wife Chirlane harbor when it comes to the prospect that their only son’s life could be in jeopardy based on the color of his skin was exactly what frustarted New Yorkers needed to hear. It was a winning moment and a defining one mainly because it disbanded the tyranny of the NYPD by exposing an issue that they have tried to casually dismiss. Their former mascot and continued spokesman, Giuliani made the rounds after de Blasio’s “betrayal” to make it known that his experience while in office was quite different. Black men kill each other and therefore don’t get to “cry wolf” when they break the law and have to pay the ultimate the price.

The attacks were leveled precisely at the man whose number one requirement is to protect and preserve the lives of the people who dwell in his city. But the code had been broken and now all bets were off. The Patrolmen’s Benevolent Association quickly issued a response filled with instigated venom. They banned de Blasio and the Council Speaker, Melissa Mark-Viverito from attending the funerals of cops killed in the line duty. He had publicly shunned the honorable men and women who put their lives on the line for strangers. Attending their funerals would be the very definition of hypocrisy.

But so is the act of presenting a discolored picture more aligned with refusing to target the issue at hand? When a video depicting a cop choking a man to death results in a non-indictment, how can law enforcement expect to be regarded with dignity and respect? The mayor’s decision to empathize with the protesters who have been occupying the streets for weeks is a noble endeavor that has now been threatened after the tragic murder of two cops this past weekend by a deranged lunatic who was clearly acting out of the realm of reasonability.

But the damage has been enough to force de Blasio to take plenty of steps back as he battles a slew of unfathomable accusations. It was a matter of time before the NYPD would have their unfortunate martyrs to help provide leverage. As the city mourns the terrible loss of the two officers, the mayor is being contemptuously pummeled with threats that are conceived with the sole purpose of making him feel like he had literally pulled the trigger.

He fought back by reiterating his past record that details his utmost respect for the NYPD, “I have throughout my public life expressed tremendous respect for the NYPD…and will continue to”. “We are working towards a day when there’s greater harmony between police and community. It’s achievable and must be achieved”.

Soon after that statement, the mayor is now asking protesters to refrain from demonstrations until the families of the murdered cops – Rafael Ramos and Wenjian Liu have had the time they need to process their loss. But most don’t see the correlation between the killings and the fight to end the reign of terror implemented by devious members of law enforcement.

The pressure to assuage the needs of the opposing sides will eventually dictate the legacy of de Blasio – as he tries to maintain law and order amidst devised chaos. Despite the warning issued, protesters are still determined to continue the mission – simply because the task at hand is still pending. The NYPD lose their own as a resultant of their job description while people of color have to spend the rest of their lives wondering how and why their loved ones were so senselessly eradicated.

For that reason alone – the struggle continues and de Blasio will try his very best not to let us down and we will readily forgive him if he temporarily fumbles.