The 88th Annual Academy Awards plunged right into the reverie of #OscarsSoWhite and host Chris Rock returned amid the controversy to ensure that the much-hyped ceremony would be #SoBlack that the mostly white audience would be fumbling in the dark for the light switch. 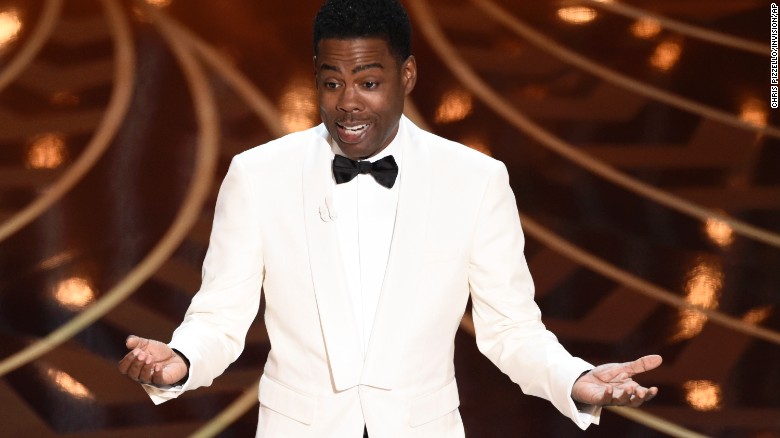 Rock, didn’t hold back the irony that he was in the driver’s seat, and his first task of the night was to welcome everyone to “the white People’s Choice Awards”.

That was enough to set off the night and prepare viewers for what turned into a mandatory history lesson that at times seemed graphically perplexing but gratifying at the same time.

Rock called attention to the fact that the relationship between black people and the Academy has always been unsatisfactory even back in the 60’s a time when racial injustice made it somewhat hard for African-Americans to spend precious time fighting for the right to claim Oscar gold.

‘We were too busy being raped and lynched to care about who won best cinematographer. When your grandmother is swinging from a tree, it’s really hard to care about best documentary foreign short”.

Ouch! And there were more heavyweights added to the mix, as Rock got warmed up and took a hit on actress Jada Pinkett Smith, who initially launched the idea of boycotting the Oscars in defense of hubby Will Smith who failed to garner a best actor nod for Concussion.

Rock, in an unexpected move ridiculed Pinkett Smith for assuming that she was invited to the Oscars – considering that she is mostly a television actress, which automatically decreases her chances of getting invited. Truth be told, her last film appearance was in Magic Mike XXL, so she does hold street cred in the film world if a movie about guys who strip for money holds her fancy.

But Rock probably felt the need to downplay the Hollywood couple’s public outcry to send the message that Smith’s performance didn’t warrant a nomination as most people recognized. And even deeper than that is that fact they have remained silent about the issue of diversity and only played it up when they became the victims of the Academy’s bigotry.

There were plenty of notables that reinforced Rock’s mission to emphasize that he wouldn’t have agreed to host Hollywood’s most prestigious affair – if he wasn’t given free reign to turn the show into a uncensored bitch fest.

Spoofs that featured Whoopi Goldberg, Tracy Morgan, and SNL’s Leslie Jones were solidly hilarious as each of the comedians including Rock himself – were strategically placed into the best picture categories – giving audiences a taste of what it’s really like to be the only actor of color.

The best had to be Rock’s segment with the people of Compton where he tested their knowledge of films by whites and for whites. It was a comical fest as each of the accosted street walkers proved that stereotypes are alive and well.

It was evident that most in the audience were oblivious as to why Dash’s appearance and purposed “appointment” was relevant and the cringe-worthy moment was escalated by Dash’s inability to act the part. Her high-pitched laughter and jerky body movements only helped to turn something that should’ve been moderately entertaining into the freak show from hell.

But thankfully there were Girl Scout cookies to help sweeten the mood, as Rock hilariously asked the Hollywood elite – to shell out enough cash to give his daughters something to smile about. The stunt worked – and $60K was raised.

The rest of the night belonged to the winners and as usual some of the predictions came true.

Brie Larson received her best actress award for Room and graciously thanked her young co-star for being her “light”. Alicia Vikander expectedly won best actress for The Danish Girl. The same honor should have been bestowed to her co-star, Eddie Redmayne for his stunning performance – but this was officially the “Year of Leo”.

Mark Rylance thwarted any hopes Sylvester Stallone harbored after slaying the awards circuit with his comeback role in Creed. Rylance took home best supporting actor for his performance in Bridge of Spies.

Sam Smith who gave a rather shabby performance of the Oscar-nominated The Writing’s On The Wall – the theme song from Bond’s Spectre – picked up the Best Song Oscar. He also mistakenly acknowledged that he was the first gay man to do so. Luckily, Dustin Lance Black who won best original screenplay for Milk in 2008 corrected the faux pas.

But Smith’s big win was still disconcerting for most since Lady Gaga was the favorite and after being introduced by none other Vice President Joe Biden before giving an affecting performance of Til It Happens To You – with the stage populated with real life survivors of sexual abuse – it was assumed she would win.

But the Academy has a thing for institutions and tradition and hence the Bond films will always take precedence – even when it shouldn’t.

But the biggest winner of the night was of course Leonardo DiCaprio who finally picked up his first Oscar for best actor for the role that had him wrestling a bear, sleeping in the carcass of dead horse and almost freezing to death. The Revenant was also good to director Alejandro Gonzalez Inarritu who picked up his second Oscar in a row (he previously won for Birdman).

Inarritu’s seized the opportunity make his acceptance speech echo the sentiment of more diversity while DiCaprio chimed in about climate change.

Spotlight won best picture, which wasn’t much of a surprise and rightly deserved.

In the end, Oscars 2016 wasn’t #SoWhite. It was #SoRelevant and #SoProgressive due to the call to action that will make it one of the most durable award shows in history.