Tennis ace and world champion, Serena Williams has enjoyed a stunningly fulfilling life both on and off the courts. With her equally formidable sister Venus by her sister, Williams has managed to rise above the social debacles and racial challenges to secure her spot in global dominance and recognition.

As she celebrates yet another gorgeous achievement via her nineteenth Grand Slam, Serena Williams is also giving Vogue Magazine her winning poses as she ushers the new season as their feted cover girl.

For the April edition, Williams not only looks incredibly fetching but she is also refreshingly unfiltered as she gives the 411 on her close friendship with fellow player, Caroline Wozniacki, who recently weathered a public disintegration of her relationship with celebrated golfer, Rory McIlroy, who reportedly broke off their engagement over the phone. Williams expresses how determined she was to rescue her friend from emotional turmoil despite the push back. 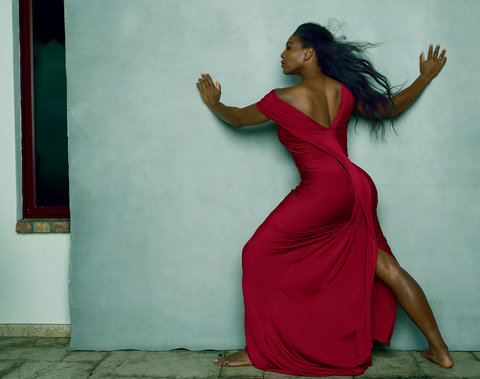 She also touches on sensitively ripe topics like the painful experience at Indian Wells, and the debilitating injuries that humbled her disposition but didn’t derail her ability to remain one of the greatest athletes of all time.

Her beauty, grace, and unbeatable countenance has been the key to Williams’ sustainability and for more on how she has amassed her wealth of success, click here.