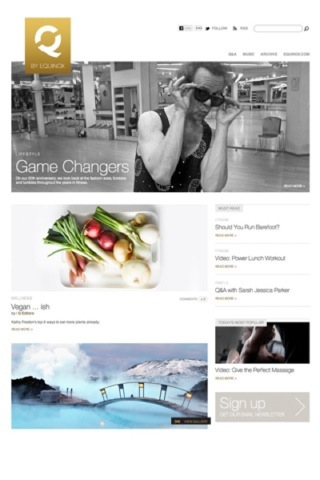 It appears Equinox Gym is more than just your destination for your ultimate fitness routine, they are now wading the editorial waters, with the recent launch of  “Q by Equinox”. The web based pub, helmed by former DailyCandy executive editor Jasmine Moir and Liz Miersch, who previously managed the fitness section of Self magazine, promises to carryover that air of excellence and luxury the trendy gym/spa is known for.

They have already lined up an impressive roster of celebs to share their secrets on how they maintain their enviable and camera-ready physiques. From Hilary Swank to Katie Couric, there is no shortage of stories that border on the hilarious to the informative. We even get the 411 on shoe designer Alejandro Ingelmo’s new venture as a gym bag designer, which he admits was inspired by his fruitless search for the perfect gym accessory. His masterpiece will be sold exclusively at Neiman Marcus in December.

In addition to the Q&As and fashion updates, there will also be a gourmet section that will cater to your appetite in a healthy way.

This is an awesome way to celebrate the twentieth anniversary of the famed gym, and obviously things are on the track since the health club chain plans to bequeath Marina del Ray with its presence sometime next spring. A global expansion is also in the works, with a store in London set to open early next year.