The residue from #OscarsSoWhite is still sifting through the air – following the Academy Awards ceremony that was held on February 28 and hosted by comedian Chris Rock.

The issue of diversity became a bigger and louder protest after this year’s nominations featured an all-white roster of talents – despite the strong performances from black actors, including Idris Elba (Beasts of No Nation), and Michael B. Jordan (Creed). 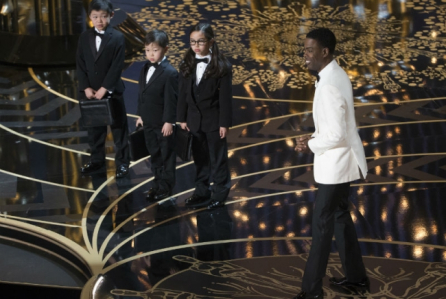 Actress Jada Pinkett Smith and director Spike Lee publicly declared that they would skip the ceremony in order to take a stance against what most deemed as the Academy’s systematic refusal to acknowledge the community of actors that are ethnically inclined.

The public outcry fueled by the momentum of social media helped to convince the Academy to actively pursue solutions that can be implemented in ways to ensure that more allowances would be made to encourage a considerably more diverse future.

But evidently there is still more work to do as the Academy faces accusations from members who were offended by the Asian jokes that most viewers felt were offensive especially since it involved children who were brought on the stage for the full effect of ridiculing Asian-sounding names.

On Tuesday, the Academy received a letter signed by 25 AMPAS members including Oscar-winning director Ang Lee, actors George Takei and Sandra Oh – and the contents of the letter clearly outlines the fact that the Academy has the responsibility of being sensitive when it comes to addressing issues of racial bias.

Here is an excerpt:

“We are writing as Academy members of Asian descent to express our complete surprise and disappointment with the targeting of Asians at the 88th Oscars telecast and its perpetuation of racist stereotypes. In light of criticism over #OscarsSoWhite , we were hopeful that the telecast would provide the Academy a way forward and the chance to present a spectacular example of inclusion and diversity. Instead, the Oscars show was marred by a tone-deaf approach to its portrayal of Asians”.
“We’d like to know how such tasteless and offensive skits could have happened and what you have in place to preclude such unconscious or outright bias and racism toward any group in future Oscars telecasts. We look forward to hearing from you about this matter and about the concrete steps to ensure that all people are portrayed with dignity and respect”.

“We are proud that the Oscars reach several hundred million people around the world of whom 60% are Asians and potential moviegoers”.

The letter was delivered just in time for this week’s board meeting and the specified recipients were AMPAS president Cheryl Boone Isaacs, CEO Dawn Hudson, and this year’s show producers – Reginald Hudlin and David Hill.

This isn’t great news for the battle-ridden institution, considering the massive attention garnered from the boycott threats – and as expected, a statement was immediately issued through the Academy’s spokesperson, “The Academy appreciates the concerns stated and regrets that any aspect of the Oscar telecast was offensive. We are committed to doing our best to ensure that material in future shows be more culturally inclusive”.

There is no doubt that host Chris Rock purposely stepped way over the line of political correctness during the telecast. But as shocked and uncomfortable most viewers were, the overall response seemed to hinge on the fact that Rock was just doing what he does best – which was to aggressively demonstrate the consequences of the crippling stereotypes that still destructively plague ethnic communities

However, the present climate of racial tension and atrocities has made it almost impossible for anyone to get away with anything that evokes levels of racial undertones.

Perhaps the Academy should refrain from utilizing comedians as hosts of the Oscars and settle for method actors instead.