In the Deck of Race Cards, Rachel Dolezal is a True American.

Okay, lets get right to it. Rachel Dolezal, is now the most fascinating woman in America because her deep dark secret (no pun intended) has now become tabloid fodder and an excuse for the media to once again dissect the impenetrable layers of racial confusion. 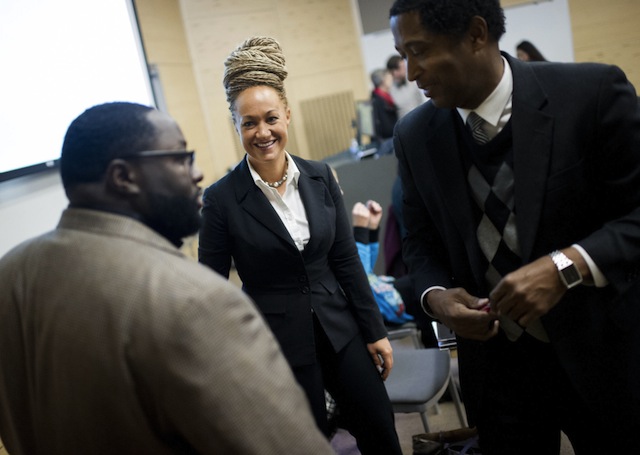 These days, its hard to flip through the channels of social media without stumbling upon pieces that are erected to give us yet another reason to be incensed about the fact that white people can’t stand black people and vice versa.

Every story, every angle regardless of the excruciating circumstances all seem to be strewn from the same genetic pool of disorder which in effect renders most of us callously mind-ridden as we try to assign the same level of frustration and disbelief to each paraded event. But tough times don’t last for long.

Now, we have been bequeathed with a gift that will keep on giving as long as she maintains her course in the wild, wild world of controversy. Rachel Dolezal, the current leader of the Spokane, Washington chapter of the N.A.A.C.P. has been outed as a fraud because she dared to exercise her racial preference in accordance with her adopted lifestyle. The 37 year-old who is also a part-time professor at Eastern Washington University acknowledged her Native American ancestry, and also duly noted that she is also both black and white. This automatically tosses her in the category of “racially ambiguous” or “biracial” which in the United States of America translates to “black”.

So therein lies the problem. Ms. Dolezal is the illustrative mascot of what it means to be a citizen of a country that forces you to routinely “pick a box” so that potentially employers or organizations interested in your services can be visually or mentally prepared for what they are investing in. But thanks to Dolezal’s revelation, we can now expect a new category for those who choose to be something other than what they actually are. Face it – we created this prototype and we have to admit that she is perfection. Despite her outer template, she has managed to flawlessly inhabited a culture that readily accepted her for reasons that can be traced back to the strings of slavery. She looked the part without question which is really what being “American” is all about. Right?

Fascinating concept? Not really. If we are prepared to accept males transforming into females because of a dire need to assume what is inherently natural, then why can’t we support a woman who chooses to be part of a race that for all intents and purposes isn’t the most heralded group of species to inhabit the earth? Is it really a crime, that she infiltrated an organization dedicated to spearheading the needs of people of color even though she brilliantly hid the fact that she doesn’t meet the expected criteria?

The answer is no. First off, the fact that she blatantly distanced herself from her parents who are supremely white and are disturbingly eager to expose their daughter’s dishonesty is proof that her childhood may have been a stifling case of mayhem that propelled her to seek comfort and validation in ways that only she can fathom.

Truth be told, the aftermath of my mental and physical mishandling caused me to regulate myself to random aliases that all did their best to protect my interests. But that was on a much smaller scale. Dolezal took it to the highest level, soaring above her own expectations, and of course when you are gifted with the position of influence, one must uphold what that role demands, and there is nothing to prove that the woman who claimed to be “colored” didn’t do just that.

Rachel Dolezal is a winner in more ways than one. She is the caricature of human perception and the true definition of what it means to be “American”. We can’t forget that this country gives us the freedom and the right to choose how we navigate our lives, and despite the chorus of naysayers, if you decide to cut off your penis or breasts so that you can have enough confidence to take a shower without gagging – then The United States of America has your back.

But Dolezal’s transformation isn’t nearly that extreme, she just wanted to find a place she could call home, a community that unequivocally accepted and appreciated her efforts. That feeling of belonging without prejudice or judgment can’t be underestimated because it’s literally a lifesaver.

If the N.A.A.C.P wanted to oust her, they would have done it by now. Her racial makeup couldn’t have been a mystery to them and if they don’t give a fuck, neither do I. People have lied about worst things and have been forgiven for them. If a white woman wants to be black so that she can feel instrumental in her quest for acceptance and organizational adherence – then we should let her.

At the end of the day, skin color is really only deep enough to prove the hierarchy of the two people who fornicated to deliver you but what resonates is how you fit in the grand scheme of things. Most people of color have never had the inclination to volunteer their time to the advancement of their own people even though the profess to care deeply about the state of things. But if a white woman who masquerades as a black woman is able to devotedly defend people who need it like a real life superhero – then that’s the greatest American story ever written.

Hollywood take note – your heroine has arrived, and she didn’t need a cape to make her entrance.