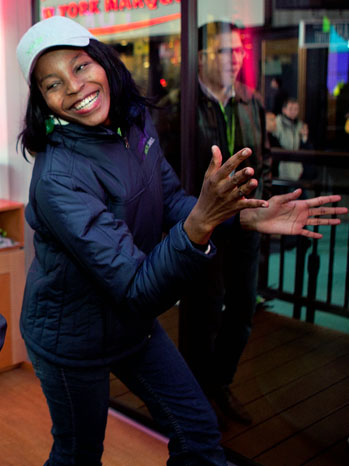 It was just a matter of time before the seduction of reality TV would make its way internationally and suck in the masses. But I don’t think we saw this one coming! Nelson Mandela’s granddaughters are going to be the subjects of a reality show that will focus on their efforts to establish themselves in their homeland of South Africa, after spending a considerable time away pursuing their studies in the US. Dorothy Adjoa Amuah, 27, Zaziwe Dlamini-Manaway, 34, and her younger sister Swati Dlamini, 32, are cousins and mothers with the exception of Amuah. The one striking element that seems to bond them is their ambitious streak and knack for business ventures.

Damini-Manaway is dedicated to the family business, Mandela Dlamini Associates, and is pondering a clothing line business, while her sister Swati is changing careers and gearing her talents towards philanthropy by establishing a foundation that will tackle medical, education and housing issues. And Amuah who not only earned an MBA from Monaco, but also has a law degree, is making a name for herself in the luxury brand market.

These women are definitely living up to the Mandela name in their own unique way and the show will strive to highlight this, as well as other family members with the exception of their parents and grandparents. Producer Rick Reed told the South Africa Mail and Guardian Online, that they hope to maintain the dignity and pride of Nelson Mandela, while still being able to capture the dramatic lives of the three cousins in a way that is entertaining and captivating.

It is also an opportunity as Amuah pointed out at a press conference in Johannesburg, to educate the world on the fact that Africans are intellectuals and can live comfortable and productive lives which in essence gives the economy a needed a boost.

But don’t dare compare them to the Kardashians! They reject the comparison and insist their show will not encourage any hints of the American based clan.

It will certainly be up to the viewers to decide when the not yet titled show hits the airwaves sometime in 2012.